In the crowd that day was a woman who had suffered greatly for twelve years from slow bleeding. Even though she had spent all that she had on healers, she was still suffering. Pressing in through the crowd, she came up behind Jesus and touched the fringe  of his garment. Instantly her bleeding stopped and she was healed.

Jesus suddenly stopped and said to his disciples,
“Someone touched me. Who was it?”

While they all denied it, Peter pointed out,
“Master, everyone is touching you, trying to get close to you. The crowds are so thick we can’t walk through all these people without being jostled.”

Jesus replied,
“Yes, but I felt power surge through me. Someone touched me to be healed, and they received their healing.” 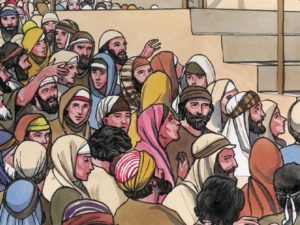 This woman was part of a large crowd that had gathered to see Jesus that day, but she was an outcast in that society, she was poor and unclean but desperate, she knew that if she could just touch the edge of HIS garment she would be healed.

The disciples thought Jesus’ question as to who had touched him in such a multitude of people, ridiculous but Jesus knew who had come to him because the power had gone out of him and this “Daughter was healed.”

Have you ever felt alone in a crowd? Has a crowd been your wilderness? Perhaps feeling you don’t really belong ? 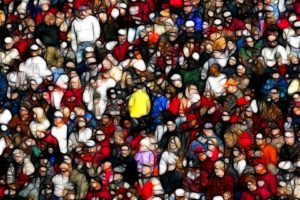 As Jesus says
“Never forget that I am with you every day, even to the completion of this age.” Matthew 28:20